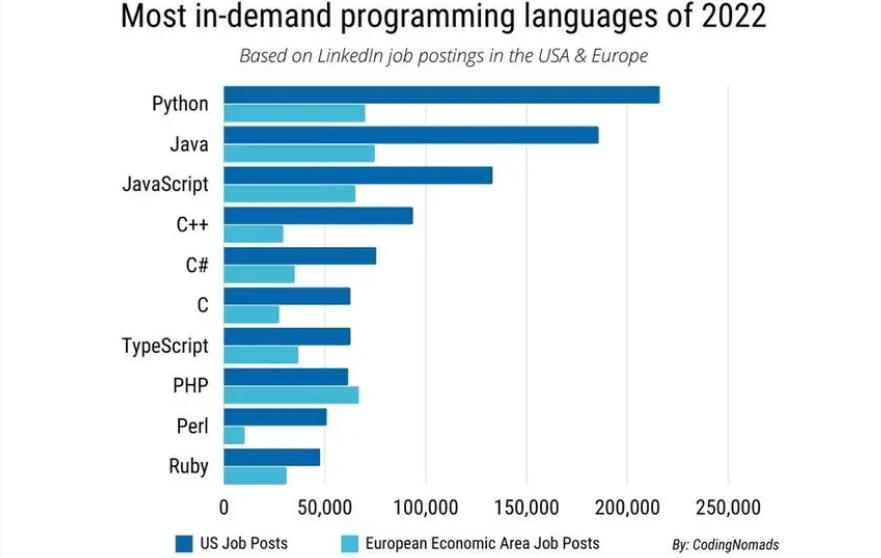 According to CodingNomads, Python is the most popular language for job seekers, followed by Java, JavaScript, C++, C#, and C.

One of the most difficult decisions for people interested in a career in programming is deciding which languages to learn. With so many languages being used for various purposes, deciding which ones to study will depend on the specialty that most interests you as well as job demand. CodingNomads, a programming course site, released a report on Tuesday that looks at the “best” programming languages for 2022.

If you’re interested in data and logic, you might want to learn Python, Java, C, C++, or C#. If you’re into visual design and user interfaces, TypeScript might be for you. If you want to create mobile apps, you should look into Java for Android and Swift or Objective-C for Apple’s iOS.

Aside from your own professional interests, you naturally want to choose a language that is in demand among employers and offers a good salary. CodingNomads investigated the most popular languages in this regard, based on job postings and salary.

Python received the highest number of job postings on LinkedIn in the United States and Europe, according to CodingNomads. Java came in second, with JavaScript, C++, C#, C, TypeScript, PHP, Perl, and Ruby rounding out the top ten.

Because salary information for TypeScript was limited, it was not listed separately. However, CodingNomads determined that its salary was comparable to that of JavaScript jobs. Furthermore, these figures are based on average salaries rather than what new programmers would earn. According to the report, successful coders can expect to meet or exceed these salaries within a couple of years.

Python is used as a general-purpose, server-side language for a wide range of tasks, from simple scripting to advanced web applications and artificial intelligence. Python is the best language to learn for developers interested in data science or machine learning, as well as general software development and web development, according to CodingNomads.

“While Python has been around for decades, demand for Python skills will continue to grow exponentially in 2022 due to its use in the booming industries of data science, machine learning, and AI,” said Ryan Desmond, co-founder and lead instructor at CodingNomads. “In addition, Python is widely regarded as one of the simplest, most powerful, and most versatile programming languages to learn, making it popular among businesses, developers, and aspiring developers.”

According to CodingNomads, Java is more difficult to learn than Python but easier than C or C++. The primary reason is that Java improved on C, while Python improved on Java. On the plus side, once you’ve mastered Java, you’ll find it much easier to learn something like Python. Anyone who wants to work as a general software engineer or mobile developer and is up for a challenge should learn Java.

JavaScript, which is used on more than 97 percent of the world’s websites, allows you to create dynamic and interactive content, animated graphics, and other complex web features. It’s also the most popular language among GitHub contributors.

JavaScript, unlike the other languages covered in the report, is primarily a client-side language that runs within a web browser. However, it’s becoming more popular on the server side with run-time platforms like Node.js and Frameworks. Overall, if you enjoy coding for visual design and user interfaces, JavaScript is the best language to learn.

SQL is one of the report’s popular languages. SQL, which is more of a querying language than a programming language, had more job postings than all of the other languages on the list in both the United States and Europe. To communicate with databases, you’ll almost always use SQL, regardless of the programming language you use. As a result, learning this language is a good idea for the majority of software developers.

Whatever language you choose to study and pursue, CodingNomads has some excellent advice.

“While several of the languages on this list would be great programming languages to learn,” CodingNomads said, “one of the most important and impactful things you can do while learning to code is to learn one language really well before attempting to learn another.” “If you try to divide your time learning multiple languages at the same time, you will take a very long time to become proficient in any of them.” Whereas if you focus and become extremely proficient in one language, it will be much easier to learn additional languages in the future.”

About the Author: Prak